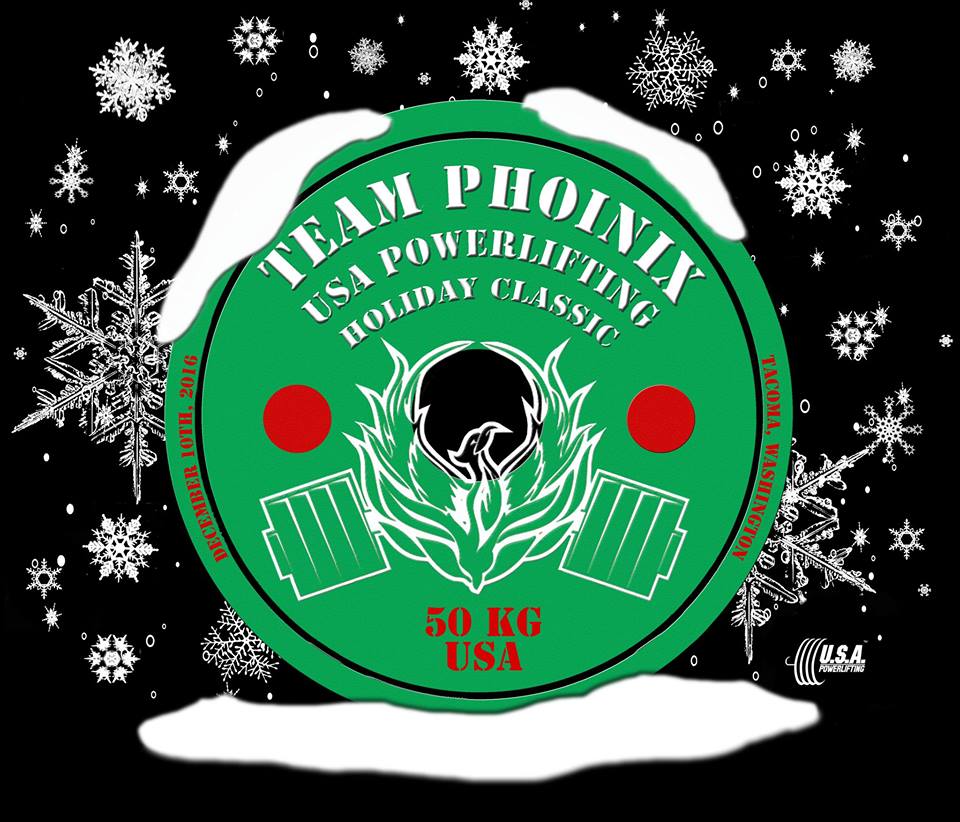 On Saturday, December 10th, we had 8 athletes, including Coach Jimmy, compete in the Team Phoinix Holiday Classic. We had a great showing from all of our lifters.

First off, it was Kelsey Edwards, Jamie Lindstrom and me, Coach Jimmy, in the morning session. Unfortunately, Kelsey was red lighted on her squats for just being  a little too quick for the judges on commands, but she did hit a 231 pound deadlift for a PR!

Jamie was up next with the best squat in her weight class, 275 pounds at 138 bodyweight, and a shaky 319 pound deadlift. Even though she locked it out the judges didn’t give it to her because it was not a smooth enough motion. The deadlift was good enough for me, so Jamie is now only 24 pounds away from the 750 club here at PP!

Jimmy was last in the morning, missing a close 374 pound bench, but getting it on the second attempt. I then went on to hit a 534 pound deadlift for a 908 pound total and a first place award for the push/pull division.

On to the afternoon session. First off was our gym mom, Deb Williams. I am so glad we were able to convince Deb to compete this year because she did great setting a state record in the squat with 143 pounds and breaking the record for the total by 30 pounds!

Next was our most intense team mate Zander Mitchell, after completely missing his first attempt (as in the event staff did not inform him he was up), he smoked a 308 pound squat and then went on to smoke another attempt at 330 pounds. Zander also  benched 231 pounds, the second highest in his weight class. Deadlift did not go as well for Zander but he has a meet planned in 9 weeks where he can refocus and get that heavy deadlift he has been gunning for.

Then we have our super strong women, Lina Waughman and Leah Williams. First up it was Lina with the smoke show of a day – a 265 pound squat, a 115 pound bench, and a 292 pound deadlift – breaking the state record for the squat in the 16-17 year old class by 45 pounds! Leah had a great showing as well with a really close miss at 314 pounds in the squat, another close miss at 165 on the bench and a record breaking deadlift of 391 pounds and second overall for heavy weight women!

The team, as a whole, placed 3rd and took home a lot of hardware. Jamie even decided after the meet was all over that she would enter and win the deadlift challenge, pulling 185 pounds for 40 reps. It was a fun day;everyone did well and had a great time. Now all the powerlifters are shifting focus to more bodybuilding and fat loss geared programs until we decide when the next meet will be. Great job everyone!

Are Deadlifts Bad for Your Back?